This is my latest post on the AAFP’s Fresh Perspectives Blog. You can also check out my recent Scope Radio podcast on this topic with Erin Fox, PharmD. Reggie is a spunky, 38-year-old patient of mine who makes my clinic day more enjoyable. His collection of chronic health problems — including type 2 diabetes, near-complete hearing loss, bipolar disorder, active hepatitis C from prior IV drug use with no current liver fibrosis and chronic migraines — certainly make life more difficult for him, making his buoyant personality all the more remarkable.

Reggie and I have been working on these conditions since I started practice a few years ago — well, except for the hepatitis C, even though he does have a treatable strain. Because many of his other conditions would likely be significantly worsened by the standard treatment regimen of interferon and ribavirin, he has never been a good candidate for therapy.

Likely every family physician has stories like this, whether about patients with hepatitis C or other conditions requiring expensive medications. If every person in Utah afflicted with active hepatitis C disease were to receive treatment with Sovaldi, it would consume the entire Medicaid budget for my state. The average cost of medications for complicated conditions such as cancer, rheumatoid arthritis and multiple sclerosis is now higher than the median household income in the United States. So it’s no surprise that rising prescription drug costs are now the biggest health care concern for the general public.

After years of ignoring the problem (and, in some cases, contributing to it), politicians and policymakers have started discussing the crisis. HHS recently hosted a summit on prescription drug prices. Presidential candidates have weighed in on the topic in their stump speeches and debates. A Senate committee recently grilled President Obama’s nominee to head the FDA on this issue. All this may or may not lead to change, but at least the issue is reaching a national level of discourse. 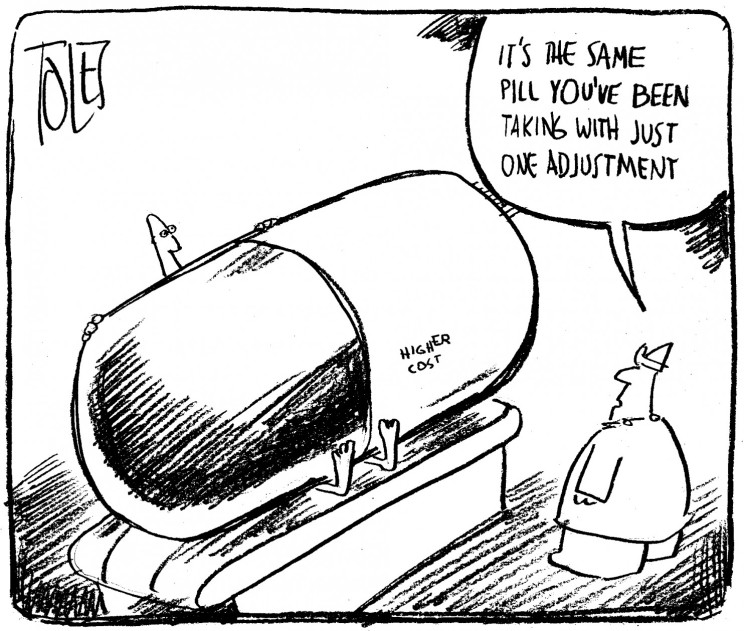 But what has led to exorbitant price increases in medications? Why do Americans pay so much more for the exact same medications than do patients in other countries? There are multiple likely culprits:

So what about Reggie and treatment for his hepatitis C? I have tried multiple avenues, but there is likely no hope for getting any appropriate regimen covered for him at this time. There is a limit to what I can do for my patients. Many pharmaceutical companies offer rebate or discount programs for medications, and occasionally, direct appeals to insurance companies (beyond prior authorizations) can be successful, but there is no easy fix to this problem.

Considering the immense power of the pharmaceutical lobby, the solution may need to come from patients up, instead of from the government down.